Report on the curlew for Drivetime on RTE Radio 1 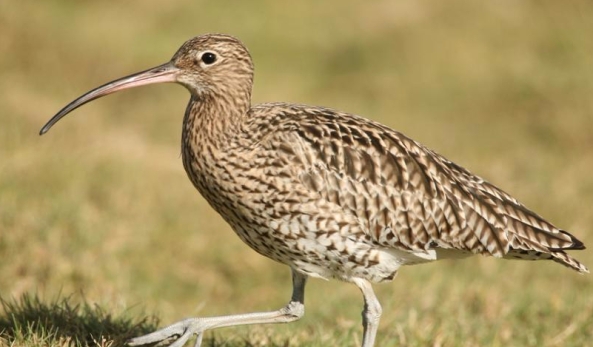 The native Irish curlew is down to about 120 breeding pairs. Picture [Birdwatch Ireland]

The haunting cry of the curlew, the wading bird with the long-curved bill which has been written about in song and verse and was once common across the Irish countryside.

Sadly, there are just 120 breeding pairs of curlew left in Ireland, a bird that has been written about in song and verse and was once so common across the Irish countryside. Thousands of curlew flock to our shores in winter to escape harsh scandinavian winters, native Irish curlew, are now on the verge of extinction.

I went in search of the curlew recently, and began by meeting Alan Lauder, an independent wildlife conservation consultant, and Chair of the Curlew Task Force, set up by the government last November, in a desperate attempt to prevent the disappearance of our native Curlews.

I met Alan in Broad Lough, an estuary of the Varty river, near Wicklow town. It’s one of the many places around the Irish coastline where thousands of  foreign-born curlews come to feed and take advantage of the mid Irish climate when they are not breeding. Many people in the conservation community had long suspected that all was not right with the curlew, but until recently nothing was done, Alan told me.

In November of last year, a meeting took place in Mullingar where experts and interested bodies gathered to discuss the plight of the native Irish curlew. The meeting decided that urgent action was required to save the bird, Alan told me.

The following day, still having not seen or heard a curlew, I travelled north in hope, to the village of Carrickroe, Co Monaghan, to meet Anita Donaghy and Joe Shannon of Birdwatch Ireland. Anita who is a project field officer for Birdwatch, gave me the background to the Curlew’s gradual, sad decline.

Joe, who is the local field officer for Birdwatch, travels around the north Monaghan countryside listening for the alarm call of the adult curlew, which indicates that curlew chicks are in the area.

He reassured me that earlier this morning he had found a breeding pair, with chick or chicks, in a newly cut field, in Drumlin country, a couple of miles north of Carrickroe village.

We had finally found a pair of native Irish breeding curlews, with one adult, probably the male, circling constantly, protecting at least one chick on the ground.

The curlew chicks are vulnerable to predators such as the fox, as they are exposed out in the centre of a cut field. The eggs are laid on the ground for one month, and then it takes a further five weeks for the chicks to gain the ability to fly, or fledge. In days gone by, sheer numbers of curlew meant the population remained stable, despite the vulnerability in early life.

Today, however, Birdwatch Ireland estimate that – just for the native curlew population to remain stable – requires each breeding pair to produce one chick, but surveys indicate curlews are only producing one chick for every five pairs.

The suspicion is that curlews are continuing to decline at perhaps a rate of 10 per cent per year, so unless something big is done, the cry of the native curlew will be lost to Ireland forever in a few short years.

The odds appear to be against the survival of the native curlew, but the National Parks and Wildlife Service is not giving up and has introduced  measures to reduce the threat from predators,

If the curlew is to survive it will also require farmers to co-operate with conservation efforts in the areas where the curlew remains, and for the public to row in behind with active support through donations or volunteering their help.