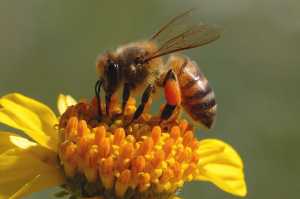 Half of managed honeybee colonies in the U.S.A. have disappeared in the last 10 years (Credit: beneficialbugs.org)

The honeybee is a vital pollinator of crops that enable humans to survive on this planet, yet, in the U.S.A. half of managed honeybee populations have disappeared in the last 10 years.

The U.S. administration was so alarmed about the threat to human existence this represents that President Obama, in 2014, launched a National Strategy to Promote the Health of Honeybees and other Pollinators.

We discuss the theories put forward to explain why honeybees are in trouble, and the main planks of the U.S. strategy to maintain and build up honeybee numbers again.

Most of us love our TV, but large screen LED TVs can take up a lot of space, when fixtures, fittings, and the width of the set are all taken into account. Imagine a large screen TV, just 1 mm in width, that can be stuck to the wall for viewing, and peeled off and put away when not required.

South Korean electronics giant, LG, say such ultra-thin, wide screen TVs will be available for sale in Autumn this year. They are based on new technology which removes the need for bulky light boxes.

We’ve heard the expression being ‘drunk in love’. Well, scientists have found that the effect of alcohol is very similar on the mind and body, as the impact of the ‘love hormone’ oxytocin.

Scientists have long wondered why sleep, which made our ancestors, vulnerable to attack, evolved in human beings. They are finding that it has a lot to do with making sense of each day’s experience.

We also discuss how Japanese scientists are making remarkable progress with a ‘dream reading machine’ that can predict the content of people’s dreams – after the fact – with up to 80 per cent accuracy.