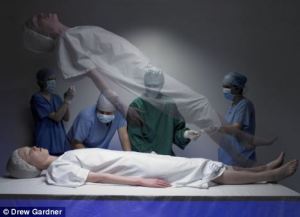 People whose heart has stopped beating and are, clinically ‘dead, have come back and accurately reported what was going on around them during the time they were ‘dead’ [Credit: Daily Mail]

Science says that consciousness is the result of our physical brain, its structure, and its chemistry.

If that’s the case, then how does science explain how some people accurately report events when their brain was clinically dead?

Meanwhile, the Universe has a lot of other weirdness that cannot be explained, such as the odd behaviour of sub-atomic particles.

Does the explanation lie in the existence of parallel universes and how they are interacting with our own?

We do know, however, that a staggering 50 per cent more short men suffer dementia than tall men. The reasons are largely environmental.