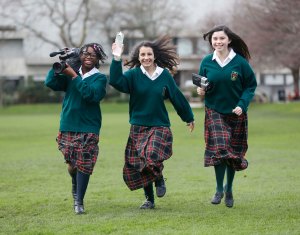 The win made it an impressive two-in-a-row of national victories for the Lucan school, who also won the competition last year in its the inaugural year.

Gabrielle Fullam, Tina Ehiguese and Lisa Browne came up with a video that was the stand-out winner of a national competition with many high quality entrants.

The winning rap, grabs the attention, and encourages teenagers to take up a sport. It highlights how exercise can help relaxation, better sleep and academic performance.

The winning video is called ‘Active Teens, Healthy Hearts’. The awards are organized by Bayer, working in partnership with the Irish Heart Foundation and the Federation of Irish Sport.

The winning students each received a tablet computer and the St Joseph’s College science budget got a significant boost from the win of 5,000 euro.

The second place in the competition this year went to Coláiste Éinde in Galway with each team member being awarded an iPod Nano.

The Awards come in the light of research last August that found that 31 per cent of teens say that they eat a lot of junk food, and 34 per cent that they have soft drinks at least daily.

The 2nd and 3rd placed videos can be seen at http://www.pumped.ie.