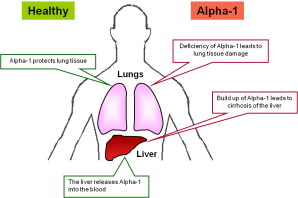 The lives of 12,000 Irish people affected by a hereditary lung condition can be improved by injecting a protein into the blood, according to new research by scientists at RCSI and Beaumont Hospital.

The hereditary form of emphysema, also called Alpha 1, is the most severe form of the lung disease, and it arises when someone is lacking the protecting protein called Alpha-1 Antitrypsin, or AAT.

Alpha-1 is much more common in Ireland than in most other countries. After cystic fibrosis, it is the most common fatal inherited lung condition in Ireland.

A lack of AAT causes an increase in white blood cell proteins in the blood, explained Professor Gerry McElvaney of RCSI, joint lead researcher on the project.

These proteins are recognized as ‘foreign’ by the body leading the immune system to respond to the ‘invasion’ by producing harmful oxidants.

The researchers found that purifying Alpha 1 protein from the blood – a process known as ‘augmentation therapy’ – and giving it intravenously can alleviate the disease.

“This research gives new hope for a better quality of life for sufferers of this chronic condition and may also be applied to other autoimmune associated diseases such as rheumatoid arthritis” Prof McElvaney added.

In 2004, the Alpha One Foundation initiated the first national screening programme for Alpha-1. To date, more than 11,000 individuals have been tested and 28% were found to be at risk from the disease.

The World Health Organisation recommends that everyone with Chronic Obstructive Pulmonary Disease (COPD) or emphysema should be tested for Alpha-1.

For more information on how to get tested for Alpha-1, see www.alpha1.ie or contact the National Centre for Alpha-1 at Beaumont Hospital (alpha1@rcsi.ie).

Their research findings were published in this month’s edition of Science Translational Medicine. The other joint lead reserachers on the project were Dr David Bergin and Dr Emer Reeves.