Cycling in Dublin city is a dangerous business due to large volumes of traffic, unsafe or totally absent cycle lanes, and an inability of drivers to ready cyclists’ intentions.

Rory Hughes, a student at Gonzaga College, Ranelagh, can’t do much about the traffic or cycle lanes, but he has found a way to help drivers better anticipate cyclists’ behaviour on the road by inventing a cycling helmet with built-in indicators and a brake light.

Accidents can result when drivers misread cyclists’ hand signals, or miss such hand signals entirely due to a blind spot, inattention, or because of poor visibility. A cyclist turning right, for example, will be in trouble if a driver doesn’t spot a hand signal.

Enter Rory’s helmet, for which he deservedly won the Junior Technology Individual Award at the BT Young Scientist and Technology Exhibition, back in January.

His idea is simple, yet ingenious. A cycle helmet that signals to following cars when a cyclist wishes to turn left or right, as well as having a brake light to show slowing or stopping. 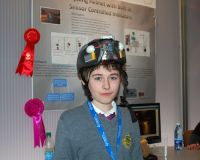 When a cyclist wishes to turn left, all he has to do is lean his head to the left, and the indicator for left comes on, while a buzzer lets the cyclist know that the indicator has actually come on. The same applies in reverse for a right turn.

This job is accomplished by an arrangement of built-in sensors, and wires, which Rory built himself, sometimes working at school, and other times at home.

When the cyclist has gone all the way around the corner, the indicator light automatically turns off, using more sensors called gyroscopes – the type of sensors that are used onboard spacecraft to provide astronauts with a clear sense of how they are orientated in three-dimensional space.

The turning off mechanism for the indicator lights is achieved by use of a class of sensors called gyroscopes, which are also used in space, to orientate a spacecraft in relation to the Earth.

The original idea for a helmet with indicators actually came from one of Rory’s friends, but his friend’s idea involved wires and buttons, which Rory felt would annoy and turn off potential users of the helmet.

It was Rory that came up with the idea of putting the indicators and lights all inside the helmet, which, he felt, would make it easier and more comfortable for cyclists to use.

Rory clearly impressed the judges with his schematic diagram, detailing how he had connected all the wires, motion sensors, batteries, and buzzers inside the helmet.

He filed a patent on the idea during the work of the BT Show in January last – a process he said was complex and required a lawyer’s assistance.

Certainly, Rory is a credit to his school, and to his teacher, Mr O’Briain. As for where me might see himself in terms of a career he said: “I’d definitely like to get into technology and I love building things, hardware, and then programming them to do things.”