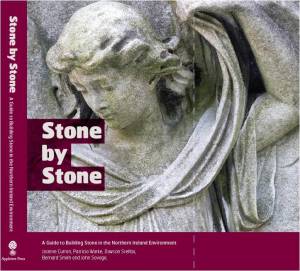 It may come as a surprise to some that Chinese granite was used by Dublin City Council in recent years to repair sections of the granite wall that had begun to deteriorate along the the river Liffey in the City Centre.

The original stone was quarried in Wicklow, but it was now cheaper for the Council to import the granite thousands of miles across the world than to have it quarried in the neighbouring county and transported to the city.

The Chinese granite closely matched the look and texture of the native stone, was cheaper, and could be delivered on the date it was needed.  The Council felt the extra expense of using Wicklow granite could not be justified.

In this context, this is a useful book, written by experts (a geologist, two geographers,  a stoneworker, and a conservation architect) that all want to promote the use of Irish stone in new buildings and preserve it in old ones.

Ireland,given its size, is certainly is blessed with great variety of stone types with granite, limestone, sandstone, marble, shale, basalt, for example, all found in abundance.

If there is one gripe I would have with this otherwise excellent book is that it wasn’t produced for an all Ireland readership. The same issues relating to native Irish stone exist in the south, and geology, and rock types do not respect political boundaries.

That said, this is a book well worth reading for anyone with even a passing interest in native Irish  stone. It will also be a book of great interest for professional architects, builders and planners.

There  is a guide to first identifying the main stone types, then to describing where they can be found in Northern Ireland, and where they have been used in some famous buildings.

The Donegal sandstones, the Mourne granite, and the Antrim Chalk are just some of the types described.

There is great detail provided on how various stone types decay, and it is a certainly surprise to see how many ways that can happen, as well as what to do once stone has deteriorated.

The best repair strategies suited to each situation are detailed, and also how to maintain the stone in good health once it has been repaired and again resembles its former glory.

On a small island, with many of the same rock types in use north and south, and with similar weather patterns and issues regarding rock decay, this is well worth a closer look for southern readers too.